Understanding the Implementation of Developmental Education Reform in Florida 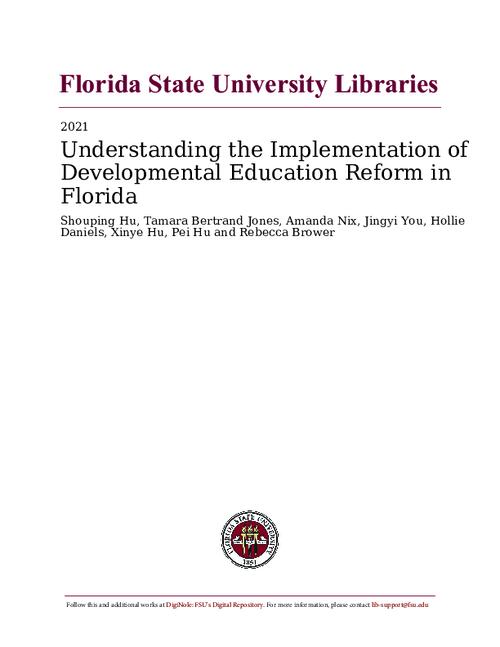 Download...
Download
Download PDF 610.1 KB
Please see the Use and Reproduction field in this object’s record below for more information about re-use of this item.
Full Title

Understanding the Implementation of Developmental Education Reform in Florida

Researchers at the Center for Postsecondary Success (CPS) have been conducting a comprehensive study on how Florida College System (FCS) institutions have implemented the developmental education reform as stipulated by Senate Bill 1720 (SB 1720). SB 1720 started a statewide developmental education reform in the Florida College System (FCS) institutions since the fall of 2014. In this report, we present findings from our longitudinal analysis of data from a sample of seven FCS institutions where we conducted repeated site visits from fall 2014 to spring 2019. At each institution, we conducted focus group interviews with college administrators, advisors, other campus personnel, faculty members, and students. We also collected institutional documents before and during the site visits, conducted field observations of teaching and advising, and examined other documents including institutional reports focusing on developmental education reform accountability submitted to the Office of the Chancellor of the Florida Colleges System. After five years of data collection, we sought to understand how FCS institutions implemented developmental education reform, and how the implementation changed over time. The questions guiding this analysis were: 1. How did the FCS institutions implement developmental education reform? 2. How did the FCS institutions’ implementation of developmental education reform evolve over time? Four phases emerged from the evidence regarding the implementation of developmental education reform in Florida: Preparation, Execution, Modification, and Expansion. Each phase represents a distinct, yet overlapping, period of time where institutions planned for, implemented, or revised their actions centered on developmental education reform. Within each phase, we focus on both the technical aspects of implementation such as how FCS institutions addressed issues related to advising, instructional strategies, and student support services as well as the attitudinal aspects of the implementation as reflected in various stakeholders’ perspectives on SB 1720.PreparationThe Preparation phase started prior to the fall of 2014, during which colleges built upon existing programs and practices and launched new initiatives to bring their colleges into compliance with SB 1720. Colleges redesigned intake procedures to allow for the sorting of students into exempt and non-exempt categories according to the definitions established in the legislation. They established new advising structures that prioritized multiple measures of documented student achievement, rather than placement test scores alone. Colleges spent time preparing and, in some cases, piloting developmental education courses taught in co-requisite, compressed, contextualized, and/or modularized modalities. Finally, they laid the groundwork for new academic support services, targeted primarily at exempt students and offered both in-person and online. During this phase, negative perspectives of SB 1720 were pervasive, but seemed to serve as motivation for faculty and staff as they prepared new ways to support incoming students, particularly those who chose to opt out of developmental education coursework. ExecutionThe Execution phase of developmental education implementation started in fall 2014. Just as in the Preparation phase, institutions’ work continued to be concentrated on the four functional areas of intake and orientation, advising, curriculum and instruction, and academic support. More specifically, the Execution phase was primarily characterized by: (1) a reexamination of advising models and expansion of advising content, (2) the adoption of instructional redesign, and (3) an increase in academic support services, especially peer tutoring and online tutoring, for students. During this phase, individual perspectives of the legislation, particularly its potential impact on “academically underprepared” students provided the foundation for their behaviors and the strategies executed to simultaneously fulfill the requirements of SB 1720 and foster student success.Modification In the Modification phase, approximately from fall 2015-spring 2018, the initial implementation efforts posed some challenges and opportunities for improvement, and institutions made changes accordingly. Overall, the implementation brought about significant workload increases for advisors, faculty, and other campus personnel. Despite the increased workload for all involved, student enrollment and success data provided institutions with confirmation that their strategies were indeed facilitating success for many student groups, or highlighted areas for further improvement for other student populations. These data guided institutions’ approaches to resolving the challenges that arose. Changes in perspectives regarding SB 1720, and institutions’ focus shifting from first-time-in-college students and developmental education reform to college-level success led the seven colleges to innovate in many areas and make adjustments to advising, curriculum and instruction, and academic support. ExpansionThe fourth phase of implementation is Expansion, during which participants spent time reflecting on all they had learned about developmental education reform, and how such insights might inform future practices. For example, during Expansion participants continued to make minor adjustments to advising, curriculum and instruction, and academic supports for the sake of academically underprepared exempt students, but this was no longer participants’ sole focus. Instead, administrators, faculty, and advisors spoke about supporting all students, including non-exempt students and those who may be experiencing food or housing insecurity. Just as in the other phases, participants again identified collaboration as an important input and outcome of implementation. In many cases, SB 1720 was no longer a mainstay in the mindsets of constituents as the focus on student success expanded among FCS institutions. 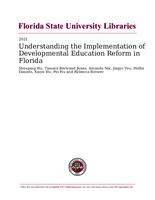