Training for Reentry: Examining the Use of Prison Vocational Programming and Its Effects on Employment and Recidivism

The emergence of an unparalleled punitive response to criminal offending in the 1970s fueled a nation-wide prison boom that continued through the first decade of the 21st century (Campbell and Vaughn, 2019; Mears and Cochran, 2015; Travis, Western, and Redburn, 2014; Clear and Frost, 2014). Growing pessimism regarding the rehabilitation of offenders precipitated the shift to policies and practices that emphasized deterrence, incapacitation, and retribution over treatment (Garland, 2001; Simon, 2007; Gottschalk, 2006). This "get-tough" movement had lasting consequences for both the process of prisoner reentry (Travis, 2005; Seiter and Kadela, 2003) and the inmate experience (Kreager and Kruttschnitt, 2018). These sweeping changes may have also had implications for the efficacy of rehabilitative programs that continued to operate despite rhetoric that "nothing worked." In-prison vocational training, for example, maintained widespread support during this period (Cullen and Travis, 1984) and continues to be one of the most widely available rehabilitative programs (Turner, 2018; Phelps, 2011; Stephan, 2008; Taxman, Perdoni, and Harrison, 2007). The permanence of vocational programs since its implementation during the early 20th century (MacKenzie, 2008) likely derives from its purported practicality for offender reentry. Former prisoners frequently identify employment as one of the most critical needs during the transition process (Western, 2018; Visher and Travis, 2011; Morani, Wikoff, Linhorst, and Bratton, 2011). Programs like vocational training can help this situation by potentially increasing one's work qualifications and employment prospects. Application of a variety of desistance and criminological theories suggests that these programs may be able to reduce future offending as well through pathways of individual change and employment. Indeed, a large body of prior research finds that vocational training can improve post-prison outcomes (Davis, Bozick, Steele, Saunders, and Miles, 2013; Wilson, Gallagher, and MacKenzie, 2000). Yet, there is little systematic research that evaluates the strengths and limitations of evidence to date, examines the use of vocational training, and rigorously assesses its effects. Accordingly, this dissertation examines four interrelated research questions. First, what is the state of evidence on vocational training? Second, what is vocational training and who gets it? Third, what is the effect of vocational training on post-release employment and recidivism? Fourth, do participant factors condition vocational training effectiveness? This dissertation finds that the current evidence base for vocational training contains a number of research gaps and methodological shortcomings. Using data from the Florida Department of Corrections, the current study highlights that vocational programs involve training for a diverse range of trades but relatively few inmates experience it and of those who do, enrollment is driven by certain characteristics (e.g., age, gender, race). Regression-based estimates of treatment efficacy indicate that attainment of a vocational certificate significantly improves post-prison employment and reduces the rate of recidivism. However, a matching-based approach reveals marginal benefits for employment and decreases in future offending. Finally, this study reveals that the effect of a training certificate on recidivism vary across different prisoner groups. Collectively, these findings suggest several implications for theory, research, and policy.

A Dissertation submitted to the College of Criminology and Criminal Justice in partial fulfillment of the requirements for the degree of Doctor of Philosophy. 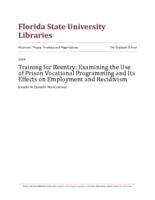 Inaccessible until August 31, 2023 due to copyright restrictions.