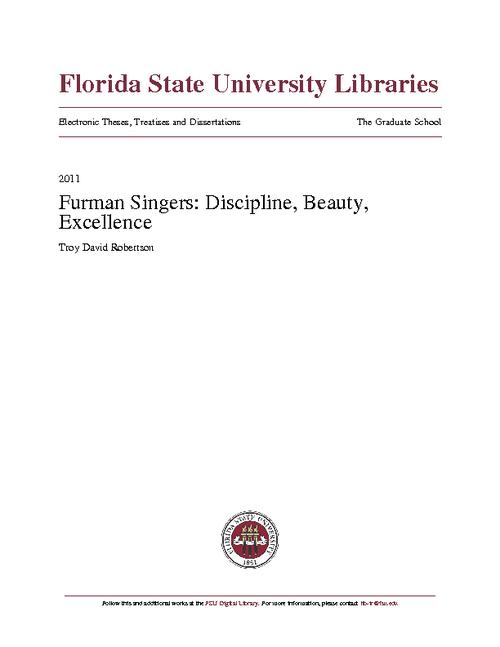 Download...
Download
Download PDF 14.86 MB
Please see the Use and Reproduction field in this object’s record below for more information about re-use of this item.
Full Title

Since 1946, the Furman Singers have been the flagship choral ensemble of Furman University, a private, liberal arts university in Greenville, South Carolina. The chorus has traveled extensively within the United States and abroad, serving as ambassadors for Furman University and the ensemble's stated mission of "Discipline, Beauty, Excellence." This study documents Furman University's early history, the first few decades of choral activity at Furman University, and the complete history of Furman Singers through the tenure of Dr. Bingham Vick, Jr. The study explores 1) the individuals, events, and institutions that led to the formation of Furman Singers, 2) the mission of Furman Singers and the ways in which that mission has changed over the decades, 3) the individuals, events, and institutions that have shaped that mission, 4) the events that demonstrate contributions to the choral art on the part of Furman Singers, and 5) the ways in which the tour performance repertoire of Furman Singers reflects the ensemble's mission. Founded in 1826, Furman University's roots stretch to the Revolutionary War and the first Baptist settlers in the United States. Named for Richard Furman, a man who was a fierce early proponent for Baptist higher education in South Carolina, the school struggled to remain viable for the first 75 years of its existence, through financial and organizational difficulties as well as the hardships of the Civil War and Reconstruction. In the late 1800s and early 1900s, as in many schools around the United States, Furman University students entertained themselves and their peers through the formation of singing quartets and glee clubs. The Furman University Glee Club enjoyed strong success in its early days of existence, winning regional competitions and participating in national competitions in the 1920s under the direction of J. Oscar Miller, a professor on Furman University's faculty. DuPre Rhame, a Furman University alumnus and former member of the club, became director of the glee clubs in the fall of 1930. World War II dramatically reduced Furman University's male enrollment, and in the 1945 to 1946 school year and Rhame formed an all-female ensemble he called The Serenaders to sing in informal engagements around Greenville in the absence of the Furman University Glee Club membership. By the fall of 1946 many of Furman University's male students had returned to school, and, at the encouragement of his students, Rhame formed the Furman Singers, the first mixed ensemble on the university's campus. Rhame directed the ensemble from 1946 through 1970. His tenure was marked by regular contributions to the cultural life of Furman University, Greenville, and the region, including continued annual presentations of Handel's Messiah, regional spring tours, and the annual presentation of a spring opera. After Rhame's retirement, in the fall of 1970, Bingham Vick, Jr. became director of Furman Singers. Vick continued many of the traditions Rhame had established as part of the Furman Singers season, though, over the course of his tenure, he instituted many changes as well. Under Vick's direction and through collaboration with the university's music department, both the Christmas oratorio performance and the spring opera performance became broader in scope and programming. Furman Singers ventured further afield on annual tours, and Vick began a biennial tour abroad. Furman Singers has engaged in several collaborations since 1970, including performances with the Greenville Symphony Orchestra, Robert Shaw and the Atlanta Symphony Orchestra, and Keith Lockhart and the Boston Pops. Furman Singers have appeared on national and local television programming as well as national radio broadcasts. The ensemble has performed for audiences of the American Choral Directors Association at national and regional conventions on several occasions. This study concludes with an examination of the tour repertoire of Furman Singers. Under DuPre Rhame, music of the stage, including musicals, operetta, and grand opera, constituted a substantial portion of the repertoire of Furman Singers. For the years of Bingham Vick, Jr.'s tenure, the core repertoire of Furman Singers was comprised of western art music from every era, including contemporary choral compositions. Throughout its existence, Furman Singers has continued to exemplify its simple motto of "Discipline, Beauty, Excellence."

A Dissertation Submitted to the College of Music in Partial Fulfillment of the Requirements for the Degree of Doctor of Philosophy. 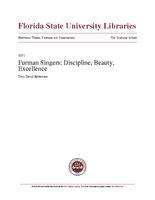