Permalink: https://diginole.lib.fsu.edu/islandora/object/fsu:fbctlhmain
About This Collection

The collection from the First Baptist Church of Tallahassee is presented here as part of a partnership between Florida State University Libraries and the church to bring community collections online. Below are the community partners, faculty, staff and students who worked to bring materials from this collection to our patrons.

These credits may be updated as more objects are added to the collection and more of our community partners, faculty, staff and students contribute their effort to providing access to these materials.

In 1849, the Tallahassee population had grown to almost 1,800 men, women, and children. From this diverse population, four men and five women organized the Baptist Church of Tallahassee. Of these nine original members, one was to become governor and another state comptroller. Throughout the over 160 year history of the Church, many members have occupied positions of leadership in private business and industry as well as in the public sector, including governors, university presidents, college deans, professors, coaches, judges, legislators, commissioners, and mayors.

The first church building was situated on the south side of College Avenue on a lot purchased for $500. With missionary pastors sent from the Home Mission Board, the membership grew until the Civil War began. There was no post-war record of ministry until 1880, when Rev. A.C. McCants was sent to lead the church.

In September 1894 the name of the church was changed to The First Baptist Church of Tallahassee, and from meager purses the building was remodeled, refinished, and reoccupied in January 21, 1900. With a membership of 407, a new church structure was dedicated in November 1915 with the coming of Pastor-builder J. Dean Adcock. First Baptist Church continued to serve the needs of the Tallahassee community in the 1920s and 1930s. But the 1940s brought an influx of World War II personnel. When the Florida State College for Women became the co-educational Florida State University, students were filling every service and it was time to build again. Dr. Harold G. Sanders led us through an eight year building program that ended with the completion of our second century church in 1957.

For more information, please visit the FBCTLH website. Their collection is presented here as part of a partnership between Florida State University Libraries and the church to bring community collections online.

Did Jesus Say That All Her Children

Did Jesus Say That How Blessed Are You

Did Jesus Say That Show Me the Way

Did Jesus Say That Speak No Evil

Did Jesus Say That The Cemetery

Did Jesus Say That Whats wrong with winter

Did Jesus Say That Wheres Jesus 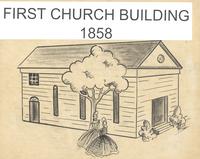 Dueling With Doubt He Guards Our Hearts and Minds

Dueling With Doubt The Most Important Weapon 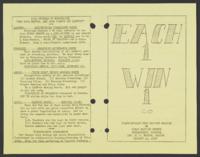 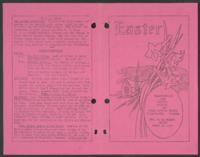