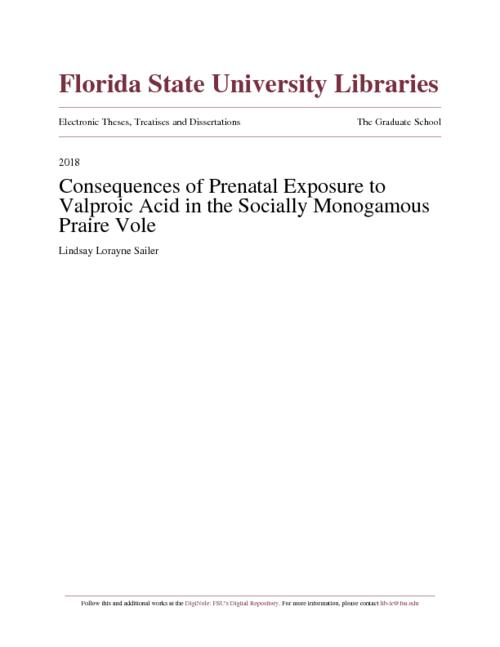 Download...
Download
Download PDF 3.46 MB
Please see the Use and Reproduction field in this object’s record below for more information about re-use of this item.
Full Title

Autism spectrum disorder (ASD) embodies a spectrum of complex, pervasive, and heterogeneous neurodevelopmental disorders. There is not one single identified cause, but is instead composed of dynamically diverse etiologies and developmental directions that ultimately influence the degree of core symptom severity. Valproic acid (VPA), clinically known as Depakote, is a popular anticonvulsant with teratogenic properties. Indeed, fetal exposure to valproic acid during the first trimester is associated with a seven-fold occurrence risk for the development of ASD. Likewise, prenatal VPA exposure in rats and mice induces social behavior deficits, replicating ASD-like symptoms in humans. While studies with rats and mice have provided valuable insights into the effects of prenatal VPA exposure, few considered both sexes and none have examined the effects of VPA in a relevant specie that exhibit strong social behaviors, which are deficient in ASD. Behaviors such as social attachment and partner preference are not displayed by rats and mice, and therefore these behaviors have not been previously assessed in response to prenatal VPA exposure. The socially monogamous nature of the prairie vole (Microtus ochrogaster) has granted us that previously unexplored advantage to investigate the consequences of prenatal VPA exposure on the ability to form social attachments or social bonding. In Chapter I, along with introducing main ASD pathologies and introducing this valuable animal model, we review several neural mechanisms that have been implicated in VPA-induced behavior, molecular, and anatomical deficits in humans and traditional laboratory rodents. In Chapter 2, we sought to determine if prenatal VPA exposure can trigger behavioral, molecular, and neuromorphological deficits in the prairie vole, in an effort to better understand the mechanisms underlying ASD-like social impairments. Prairie voles exposed to VPA at 600 mg/kg on embryonic day 12.5 engaged in fewer social affiliative behaviors in a familial context, exhibited fewer social interactions with novel conspecifics, and showed enhanced anxiety-like behavior. Interestingly, among numerous genes that we examined, and are linked to autism spectrum disorders, expression of avpr1a, an essential social behavior-relevant gene, and mecp2, an important player in the regulation of synaptic plasticity and social behaviors, were the only two genes whose expression were down-regulated in the medial prefrontal cortex (mPFC), a brain region implicated in complex cognitive and social behaviors. Considering that evidence of atypical structure and function in the mPFC has been linked to individuals with ASD, in VPA-exposed rats and mice, and now in our VPA-exposed prairie voles, we next sought to examine changes in mPFC dendritic spine density and morphology. However, we found no alterations in dendritic spine density and morphology in the mPFC of adult prairie voles, suggesting that although prenatal VPA exposure induces underweight phenotypes throughout development, adolescent social deficits, and down-regulation of genes relevant to social behaviors, it does not seem to alter neuronal morphology and likely communication between neurons in mPFC. However, this finding needs to be further explored. It is important to note that co-parental care to the VPA-exposed offspring remained sustained and similar to vehicle-exposed offspring, implying that VPA treatment effects in the offspring is not the consequence of differences in paternal and/or maternal care. Following VPA-exposed rat and mouse models, we report that both male and female prairie voles prenatally exposed to VPA exhibit affiliative behavior and social interaction impairments, associated with a reduction of social behavior- and ASD-relevant genes in the mPFC, but no alterations in dendritic spines morphology or density in this brain area. Our data suggest that prenatal exposure to VPA in male and female prairie voles could be a useful animal model for investigating how developmental perturbations early in life lead to long-term changes in social behaviors that are perturbed in ASD. In Chapter 3, to address how prenatal VPA exposure affects opposite-sex social attachments in prairie voles, we followed the same VPA exposure paradigm, allowed subjects to reach sexual maturity, and assessed their ability to form partner preferences and display selective aggression following two weeks of cohabitation with mating. Similarly to the cohort of VPA-exposed prairie voles tested for adolescent social behaviors, this group received normal co-parental care. Remarkably, VPA-exposed subjects displayed a robust preference for their opposite-sex partner, versus an opposite-sex stranger, and correspondingly displayed high levels of aggression against same-sex intruders. These results suggest VPA alters only certain behavioral domains such as sex-naive anxiety and affiliative behaviors, but does not alter other domains such as social bonding with opposite sex individuals Finally, in Chapter 4, we provide a summary of our findings and a general discussion of their implications, as well as future directions for the study of the consequences of prenatal VPA exposure in prairie vole social monogamous behaviors. Taken together, this work demonstrates that prairie voles are valuable animal models for validating the use of the prenatal VPA exposure model of ASD. Significantly, using the socially monogamous nature of the prairie vole allowed us to highlight an important distinction between same-sex social affiliative behaviors and the underlying processes of enduring sexual attachments affected by prenatal VPA exposure—a peculiarity observed in a subtype of the autism spectrum.

A Dissertation submitted to the Department of Biomedical Sciences in partial fulfillment of the requirements for the degree of Doctor of Philosophy. 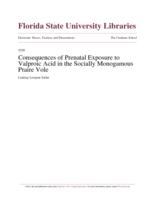