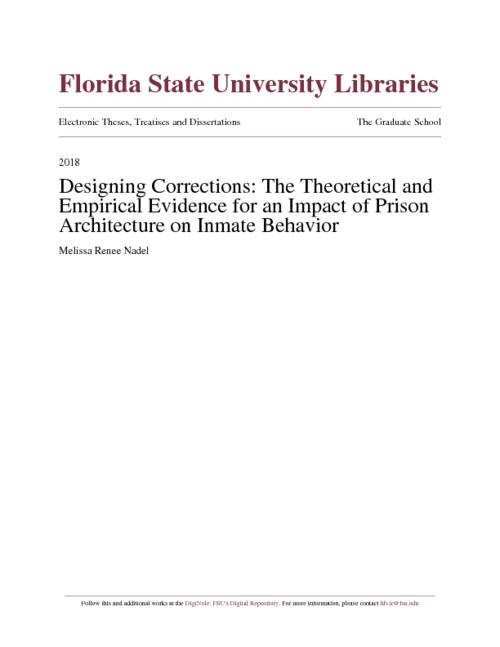 Download...
Download
Download PDF 1.88 MB
Please see the Use and Reproduction field in this object’s record below for more information about re-use of this item.
Title

Designing Corrections: The Theoretical and Empirical Evidence for an Impact of Prison Architecture on Inmate Behavior

The incarceration boom of the late 20th century led to a concomitant rise in prison construction. Over two thousand state and federal prisons are currently in operation across the United States, and these prisons are considerably varied in their architectural design (Johnston, 2000; Bosworth, 2005; Kirchoff, 2010; Wener, 2012; Jewkes et al., 2016). This variation implies an underlying assumption that the physical features of a prison can have a measurable effect on corrections outcomes, including safety of staff and inmates, reduction in operation costs, reduced misconduct, or reduced recidivism. If architecture served no purpose, then prison design would likely be much more uniform (Sommer, 2007; Morris & Worrall, 2014). Why spend money on new designs if architecture does not matter? However, there has been little to no theoretical or empirical attention given to the role of architecture in inmate outcomes. An extensive literature supports the importance of prison design to inmate behavior. This literature details the significance of the prison environment in predicting inmate misconduct (Sykes, 1958; Irwin & Cressey, 1962), the psychological justifications for how our physical environment influences our perceptions, emotions, and behaviors (Sommer, 1974; Archea, 1977), and the development and presumed effect of prison architecture over the last four centuries (Fairweather & McConville, 2000; Wener 2012; Morris & Worrall, 2014; Steiner & Wooldredge, 2014). Yet, despite the considerable conceptual support for this relationship, only six studies have ever empirically explored this relationship. The goal of this dissertation is to contribute to the literature on this understudied topic in several ways. First, drawing on evidence from criminology, psychology, and architecture research, it provides an extensive overview of the literature that might support the expectation of a substantive relationship between prison design and inmate or corrections staff behaviors. Second, it provides qualitative evidence of the justifications behind different prison architectures, including the perceived mechanisms by which the characteristics of prison designs influence inmate and staff behaviors. Finally, it explores the empirical support for an effect of architecture on inmate behaviors by using multi-level modeling to assess the impact of various prison designs in Florida on the likelihood of inmate misconduct. The data for this study was retrieved from several sources, including qualitative data obtained through interviews with prison administrators and architects, quantitative data from the Florida Department of Corrections (FDOC), and prison level characteristics from the Census of Federal and State Correctional Facilities. The data provided by the FDOC in particular has several benefits, primarily its ability to track the movement of inmates between facilities during their incarceration term. The findings from this study indicate that the architectural features of a prison, such as layout, housing types, lines-of-sight, and aesthetics, can affect the quality of life, prison experiences, and subsequent behaviors of both inmates and correctional staff. It does so through a number of mechanisms, including opportunities for misconduct, flow of inmate movement, behavioral reform, and stress or agitation. In addition, there is also empirical support for the association of architectural characteristics on inmate misconduct. Inmates housed in linear facilities as well as campus prisons that incorporate dormitory style housing and T-Dorm building designs were significantly more likely to engage in misconduct. The implications of these findings for theory, research, and policy, as well as the limitations of this study and suggestions for future research are discussed.

A Dissertation submitted to the College of Criminology and Criminal Justice in partial fulfillment of the requirements for the degree of Doctor of Philosophy.

Nadel, M. R. (2018). Designing Corrections: The Theoretical and Empirical Evidence for an Impact of Prison Architecture on Inmate Behavior. Retrieved from http://purl.flvc.org/fsu/fd/2018_Su_Nadel_fsu_0071E_14635 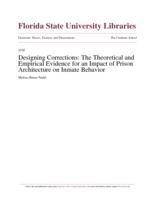