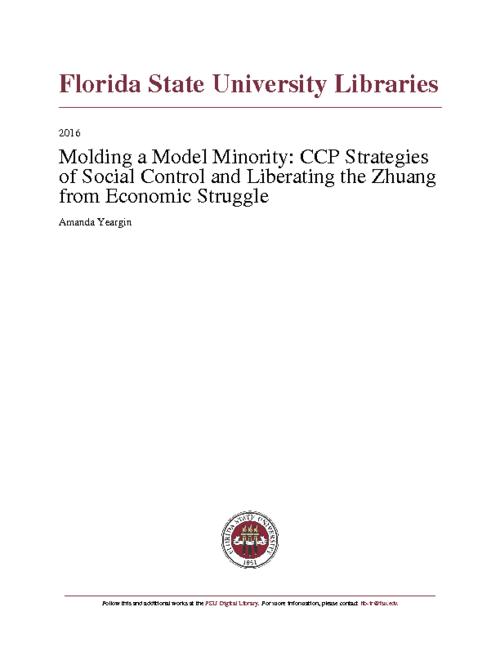 Download...
Download
Download PDF 1.61 MB
Please see the Use and Reproduction field in this object’s record below for more information about re-use of this item.
Full Title

Molding a Model Minority: CCP Strategies of Social Control and Liberating the Zhuang from Economic Struggle

This qualitative study, which examines media representation issues of China’s Zhuang people and the Guangxi Zhuang Autonomous region, is based on a content analysis of the People’s Daily, the official media organ of the Chinese Communist Party (CCP). Using the Zhuang and Guangxi as a case study, I investigate CCP strategies of social control within the People’s Daily, advancing scholarship on the authoritarian utilization of media and minority-majority relations. My study features primary research as I provide quantitative data to support my qualitative analysis, concluding that the CCP, within the People’s Daily, strategically prescribes correct ideology and conduct through 1) distortion of reality through projections of power, and disproportionate representation of certain topical categories within the People’s Daily (Chapter Five), 2) distraction from sensitive topics through the displacement, or redirection, of readership’s attention (Chapter Five), and 3) prescription and modeling of correct behavior (Chapter Six). These strategies, I argue, are similar to the Chinese dynastic official texts used to instruct imperial women on how to behave. I not demonstrate in my study the CCP’s strategies in using media to shape thought and maintain social control over the Zhuang and Guangxi, but also explore Zhuang responses to the CCP’s disseminated messages (Chapter Seven). For the content analysis which serves as the basis of my study, I, along with statisticians at Florida State University’s Survey Research Laboratory, categorized all articles published in the People’s Daily from 1990-2015 with the keyword Zhuangzu (Zhuang nationality) into nineteen categories. The five largest were Local Politics and Policy, Development, Culture, Elections, and Interactions with Foreigners. Each category is illustrated in a figure which shows the shifting focuses of the CCP over time. Through my original research, using the data retrieved from the People’s Daily, I construct a periodization in representation of the Zhuang and Guangxi, which I have chosen to organize by phases: “Phase One: Post-Tiananmen Restructuring (1990-1992),” “Phase Two: Deng’s Economic Developments Take Root and Bear Fruit (1992-2001),” “Phase Three: New Millennium, New Problems (1999-2006),” and “Phase Four: China’s Global Debut (2005-2015).” With this periodization, I provide a framework by which to understand twenty-five years of political and economic developments for the Zhuang and the Guangxi Zhuang Autonomous Region, as I explore the dynamics of the CCP’s use of the People’s Daily for social control. Then, I analyze in depth two phenomena found within the People’s Daily which apply specifically to the Zhuang people. The first is my comparative study between dynastic and modern texts, in which I relate Chinese imperial strategies of control over women and the CCP strategies of control over the Zhuang. I draw parallels between the use of exemplary citizens in official texts to model appropriate behavior, observing how dynastic women and modern Zhuang, each periphery peoples, were ‘managed’ and represented in similar ways by their respective central authorities. Finally, I further investigate the use of tourism as economic development, and culture as a commodity, at the urging of the CCP, among the Zhuang. After the previous chapters in which I focus heavily on the unidirectional dissemination of state messages, within this chapter, I illustrate the Zhuang expression of ethnic identity and agency in the context of ethno-tourism, while drawing comparisons with present day Native Americans within the United States, and their experiences at historic reconstruction sites. The figures I provide, along with the periodization in which I interpret these figures, will prove to be a valuable resource for historians, anthropologists, and social scientists alike, advancing scholarship on the Zhuang as well as the CCP use of strategies within the People’s Daily as a mechanism of social control. My comparative analysis of the use of “Exemplary People” in dynastic and present day texts is an extension of this periodization, in that it offers a deeper analysis of the People’s Daily and its functions, while demonstrating the continuity of the Chinese central government’s strategy of modeling correct behavior within state-sanctioned texts. My exploration of ethno-tourism offers a look at the reception of government-issued media, as I shift my focus away from the source of the unidirectional messages, analyzing instead the responses of the supposedly passive recipients. Ultimately, my study is one of intersecting discourses and narratives as the Chinese state, and the society which it endeavors to mold by use of the media, together negotiate a mutual future.

A Thesis submitted to the Program in Asian Studies in partial fulfillment of the requirements for the degree of Master of Arts.

Yeargin, A. (2016). Molding a Model Minority: CCP Strategies of Social Control and Liberating the Zhuang from Economic Struggle. Retrieved from http://purl.flvc.org/fsu/fd/FSU_2016SU_Yeargin_fsu_0071N_13332 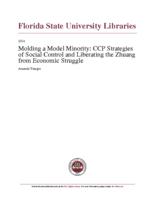