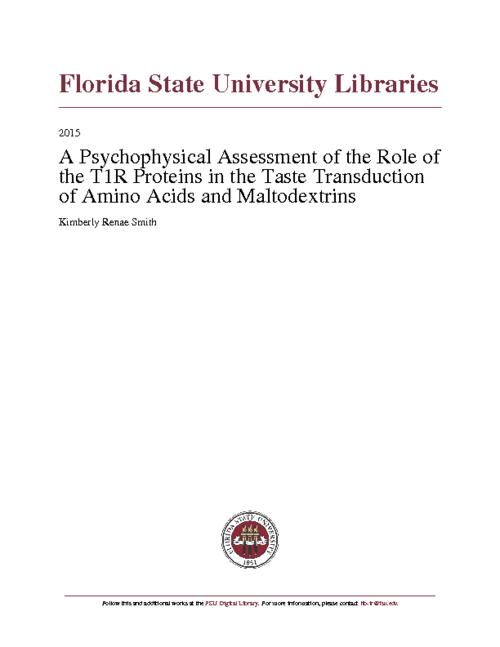 Download...
Download
Download PDF 1.56 MB
Please see the Use and Reproduction field in this object’s record below for more information about re-use of this item.
Full Title

The taste system enables the detection and discrimination of potential nutrient sources necessary for maintaining essential life processes. Nutrients bind with taste receptors in the oral cavity that convert the food-derived signal into neural activity interpretable by the brain. The four independent, canonical taste qualities are "sweet", "salty", "sour", and "bitter" with additional proposed basic tastes, such as "umami", "polysaccharide", and "fat" taste, garnering support in the literature. A given taste quality is elicited by nutrient compounds that share chemical properties. The proposed qualities of interest here were "umami" and "polysaccharide" taste. Prior in vitro and in vivo studies suggest that the taste receptor mechanisms responsible for mediating "sweet" taste, elicited by sugars and sweeteners, and "umami" taste, elicited by L-glutamate, in mammals are heterodimers of the Taste Receptor Type 1 (T1R) proteins—T1R2+T1R3 and T1R1+T1R3, respectively. However, whether the T1R1+T1R3 heterodimer is the sole mediator of "umami" taste is not without controversy; other mechanisms have been proposed. Further disputes relate to the classification of "umami" as an independent taste quality. Whereas a portion of the literature implicates "umami" as a unique taste sensation, evidence suggests it represents a mere combination of "salty" and "sweet" taste. The experiments here (Chapters 2-6) combined psychophysical methodology with genetic knockout models to address the following: 1) Are the individual T1R proteins—T1R1, T1R2, and T1R3—necessary for maintaining sensitivity to "umami" stimuli? 2) Given the proposed commonalities between "umami" and "sweet" taste, is the T1R2+T1R3 involved in transducing the L-glutamate signal? 3) How is sensitivity to other non-"umami"-tasting amino acid stimuli affected upon deletion of one or more T1R proteins? The taste detection of the prototypical "umami" stimulus, monosodium glutamate (MSG), in wild-type (WT) controls, and T1R1, T1R2, T1R3, and T1R2+T1R3 knockout (KO) mice was severely impaired if not eliminated when the taste signal from the sodium component was minimized by the epithelial sodium channel (ENaC) blocker amiloride. Only when inosine monophosphate (IMP), a known potentiator of the L-glutamate taste signal, was prepared with the MSG and amiloride mixture were WT and T1R2 KO mice able to detect the compound stimulus due, in part, to the taste of IMP. In contrast, mice lacking T1R1 or T1R3 were incapable of detecting IMP alone, but showed sensitivity to at least the higher concentrations of MSG (+amiloride) when IMP was present. Similarly, T1R2+T1R3 KO mice showed significant sensitivity loss to the purportedly "sweet-like" achiral amino acid glycine. However, the sensitivity of T1R1 KO mice to L-lysine was unimpaired. Collectively, these data demonstrate the necessity, but not exclusivity, of the T1R subunits in the taste transduction of some amino acids such as MSG (in the presence of IMP) and glycine. The partial competence observed in some of the mice lacking the T1R1 or T1R3 subunit suggests the presence and activity of another receptor independent of the T1R1+T1R3 heterodimer—perhaps a novel protein or T1R homodimer. Furthermore, unimpaired sensitivity to L-lysine in the T1R1 KO mice suggests that some L-amino acids can be detected through T1R1+T1R3-independent mechanisms without sensitivity loss. Polysaccharides, specifically maltodextrins, such as Maltrin and Polycose, are composed of glucose polymer mixtures of varying glucose chain lengths. Although glucose and other sugars activate the T1R2+T1R3 heterodimer, maltodextrins are suggested to potentially bind with a different receptor leading to the generation of a qualitative taste perception distinguishable from that of sweeteners. Recent evidence supporting this hypothesis derives from T1R2 or T1R3 KO mice. While these KO mice display relatively normal responses to maltodextrins the slight impairments in behavioral responsivity raise the possibility that T1R homodimers might contribute to polysaccharide taste transduction. Therefore, experiments incorporating psychophysical methodology and mice lacking both T1R subunits of the sweet taste receptor (Chapter 6) were conducted to address the following questions: 1) Is the T1R2+T1R3 heterodimer necessary for maltodextrin taste detection? 2) Do maltodextrins and sweeteners possess discriminable taste characteristics? Most T1R2+T1R3 KO mice displayed similar sensitivity to Polycose as WT mice. However, some were only sensitive to the higher Polycose concentrations, implicating potential allelic variation in the polysaccharide taste receptor. Concentrated polysaccharide and sweetener solutions are characteristically viscous, at least at the higher concentrations, and this oral somatosensory stimulus feature may serve as a cue in this taste detection task. Therefore, viscosity-matched Maltrin and sucrose concentrations were presented to KO and WT mice in a 2-tastant operant discrimination procedure. Both WT and KO mice competently discriminated Maltrin from sucrose. However, performance in WT mice was likely driven by the different taste percepts of the two stimuli, while KO mice likely relied on the taste cue from Maltrin as opposed to sucrose. To my knowledge, these results represent the first demonstration that maltodextrin is qualitatively distinguishable from sucrose in an explicit taste discrimination task, and, coupled with the detection data, implicate that distinct dedicated taste pathways from the periphery to central circuits are mediating polysaccharide and sugar taste.

A Dissertation submitted to the Department of Psychology in partial fulfillment of the Doctor of Philosophy.

Smith, K. R. (2015). A Psychophysical Assessment of the Role of the T1R Proteins in the Taste Transduction of Amino Acids and Maltodextrins. Retrieved from http://purl.flvc.org/fsu/fd/FSU_2015fall_Smith_fsu_0071E_12841 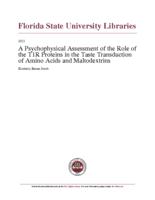