The Italian newspaper Il Secolo, a 4 page political daily, introduced many technological and thematic innovations in Italian journalism. Founded in 1866 by publisher Edoardo Sonzogno, in the space of a decade it became the most widely read national daily across the country, reaching print runs of up to 300,000 copies during the 1870s and 1880s. Eclipsed in readership and in political relevance by the 1890s by the Corriere della sera, it ceased to exist in 1925.

The collection of Il Secolo was digitized from original copies of the paper in Italy and is now being described and made available here at Florida State University thanks to the efforts of Dr. Silvia Valisa and funding from Robert B. Bradley Library Research Grants. This is an ongoing project and new issues are being added to the collection continually as Digital Library Center staff process and load the digitized issues. 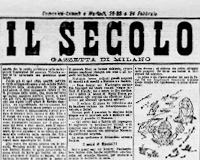